In the midst of the hardship brought by COVID-19, the Community Action Organization of Western New York has persisted in its 55-year mission to serve low-income populations throughout the region. At the helm of CAO’s expansive anti-poverty programming, Thomas U. Kim will now serve as the new president and chief executive officer.

Before taking over at CAO, Kim provided consultation for the Los Angeles Dream Center, which provides resources to the homeless and underprivileged via community and residential outreach. In the same vein, Kim has also served on the board of directors for Chicago’s Primo Center, offering services for homeless children and families, as well as trauma-informed care, early childhood services Thomas U. Kim and health care. Kim has his clinical social work license and has worked as a youth minister. He joined the U.S. Army Reserve in 2004 and completed three deployments between then and 2017. As the son of a single mother and an immigrant,

Kim’s passion for serving disadvantaged populations is rooted in his own life experiences. 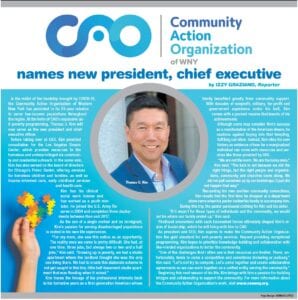 “For my mom, she saw this nation as an opportunity.

The reality once we came is pretty difficult. She had, at one time, three jobs, but always two or two and a half jobs,” Kim said. “Growing up in poverty, we had a studio apartment where the landlord thought she was the only one living there. We had to create this elaborate scheme to not get caught in this tiny, little half-basement studio apartment that was flooding when it rained.”

Kim traces the lineage of his professional interests back to his formative years as a first-generation American whose family benefited greatly from community support.

With decades of nonprofit, military, for-profit and government experience under his belt, Kim comes with a packed resume that boasts of his achievements.

Although some may consider Kim’s success as a manifestation of the American dream, he cautions against buying into that tempting, fulfilling narrative. Instead, Kim cites his own history as evidence of how far a marginalized individual can come with resources and services like those provided by CAO.

“We are not the norm. We are the lucky ones,”

Kim said. “The luck is not because we did the right things, but the right people and organizations, community and churches came along. We did not pull ourselves up by our bootstraps; it just did not happen that way.”

Recounting his own positive community connections,

Kim recalls that the first time he shopped at a department store came when his pastor invited his family to accompany him.

During this trip, the pastor purchased clothing for Kim and his sister.

“If it wasn’t for those types of individuals and the community, we would not be where our family ended up,” Kim said.

Firsthand encounters with such benevolent forces ultimately shaped Kim’s vision of leadership, which he will bring with him to CAO.

As president and CEO, Kim aspires to make the Community Action Organization the gold standard for anti-poverty services. Beyond providing exceptional programming, Kim hopes to prioritize knowledge-building and collaboration with like-minded organizations to better the community.

“One of the challenges that I often see is that resources are limited. There, unfortunately, tends to come a competition and sometimes bickering or jealousy,” Kim said. “Let’s not try to compete. Let’s come together and create collaborative agreements so we can work together as a unified entity serving the community.”

Beginning this next season of his life, Kim brings with him a passion for building bridges and collaborating to support the community. For more information about the Community Action Organization’s work, visit www.caowny.org.